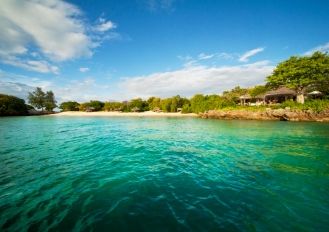 Beach from the boat 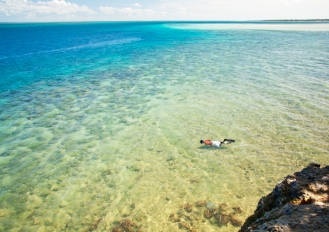 It’s not an easy journey to Azura Quilalea (all the better for deterring less discerning travellers), but once you’re here there are only nine airy, understated villas sharing the island’s 86 unspoilt acres.  Onshore you’ll find baobabs, barefoot luxury and the odd nesting turtle, while offshore there’s an equally tempting marine reserve with pods of dolphins and migrating whales passing by.

Azura Quilalea’s beautiful, low key rooms are naturally decorated and named after the trade winds- Kaskazi and Kusi. The latter cost a fraction more, but reward you with a slightly better location and an outdoor shower- desperately romantic in our book. Even more private, but equally laid-back, Villa Quilalea has a plunge pool and its own ladder down the cliff to the ocean.  At Quilalea’s main lodge there’s deliciously fresh fish and seafood to tempt you from your room, a bar overlooking the ocean, and hammocks beneath the trees for the serious business of your afternoon snooze.

What can I do at Azura Quilalea?

One of the great lures of Azura Quilalea is the diving and snorkelling right from the beach- one of the few places on Africa’s Indian Ocean coastline where this is possible. Snorkelling near Quilalea is fabulous, but if we could, we’d tempt you out to the offshore reefs too- snorkelling with dolphins isn’t unusual here. There’re also kayaks and dhow trips, a lovely spa if you’re in need of additional R&R and deep sea fishing if you don’t find Quilalea’s sushi to your tastes…

Giving back with Azura Quilalea:

Azura Quilalea does a good job of dancing the difficult line between delivering luxury and having a positive impact on the natural environment and surrounding community. Generator use is kept to a minimum, with solar and wind power used wherever possible. Guests have the choice to set power usage in their rooms to luxe or eco, and rainwater is harvested on the villa roofs. An optional $10 per night from each guest goes to the Rainbow Fund which supports local projects- at Quilalea these include protecting the reef and providing books and medicine to the local community.